Kevin Frazier continues to impact the entertainment industry as a multi-faceted journalist, producer and entrepreneur. As co-anchor of omg! INSIDER, formerly THE INSIDER, he is the only African American male currently anchoring a daily newsmagazine show for broadcast television. He has interviewed Hollywood’s biggest stars from Brad Pitt to Will Smith to Oprah Winfrey and Beyoncé. 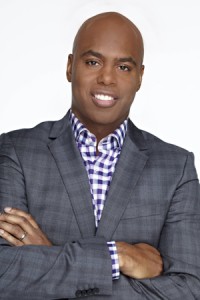 Launching on September 28, 2013, Frazier will be joining The CBS Dream Team, It’s Epic!  Frazier will be the host of Game Changers With Kevin Frazier, which spotlights professional athletes who use their public image to make positive changes in the lives of fans in need.

In 2012, Frazier teamed with Heidi Klum to host Clash of the Commercials on CBS, returned as lead anchor for College Football on FX and Fox Sports Net and hosted the launch of SportsNet for Time Warner Cable. Frazier has co-hosted the Macy’s Thanksgiving Day Parade on CBS in 2011 and 2012.  In April 2013, Frazier was a presenter at the Academy of Country Music Awards.

Prior to co-anchoring THE INSIDER, Frazier served as the weekend anchor and correspondent of ENTERTAINMENT TONIGHT.  Frazier’s professionalism, charisma and demeanor has made him a sought-after journalist to cover high-profile and historical events as wide-ranging as President Barack Obama’s presidential inauguration to the royal wedding of Prince William and Kate Middleton to the deaths of music icons Whitney Houston and Michael Jackson.

In 2008, Frazier founded HipHollywood.com, the premiere online web site for the latest urban entertainment news. The site is a content partner for ETonline and TV One, offering breaking news, up-to-the moment pop culture information, and exclusive photos and interviews with today’s top stars in music, sports, television and film. HipHollywood is the only urban media outlet providing broadcast quality content for television distribution.

Additionally, he launched Kevin Frazier Productions (KFP) to focus on in-depth reporting and video production for a variety of corporate and entertainment clients. The company recently produced a series of film vignettes for “Freedom Sisters,” a traveling museum exhibit curated by the Smithsonian about women involved in the Civil Rights Movement. Hosted by Frazier, the exhibit toured nationwide through April 2012. KFP has collaborated with music producer will.i.am to create video content for his lifestyle web site and partnered on projects with business magnate Russell Simmons.

Frazier began his broadcasting career as a local sports reporter after a stint as an assistant basketball coach at Morgan State University in Baltimore. Prior to joining ENTERTAINMENT TONIGHT in 2004 he served as host of ESPN’s “SportsCenter,” “NBA Shoot Around” and “NBA Fastbreak.”  He also worked at the FX Network as co-host of “The FX Sports Show.”  He has served as a sideline reporter for the “NFL on Fox” telecasts as well as host of the pre-game shows for “NFL on Fox,” “NHL on Fox” and “College Football Saturday.”

Frazier is an active member of the Los Angeles civic community and frequently participates in events and speaking engagements for charitable organizations. He is a member of the National Association of Black Journalists.

CBS Television Distribution is a unit of CBS Corp.